"The Stars Have Dreams. We Write them down."


The Current Featured Publication of Fantasy Forge Press is:


"Racing the Nightmare"
by C.E. Sales

At Long Last, Book 2 in the 'Kazimeer' Series!

Landon has resumed his reign as Kazimeer and thankfully destroyed Taj, the Dark Master.
Jaron has also been enjoying the new path his life has taken, until one day when he goes to sleep.

There, in his dreams, he discovers he is not all he appears to be, even to himself,
and worse the Dark Master was not destroyed.

Taj has found himself in this dream realm, desperate to leave it and reclaim the Land.
Crafting a possible means to return, he tries to free himself. Instead he releases something else.

An entity that cannot feel or think and feeds relentlessly on everything. Landon and Jaron now
find themselves on the run from a faceless, mindless, expanding and unstoppable force that
cannot be reasoned with, cannot be physically fought, and cannot be overpowered by magic.

Their search for a solution takes them across the Land, fighting time before the entity
consumes everything in its path. The answer they seek may lie with the Dark Master himself,
if they are willing to release him!

"Hosting the Kazimeer"
by C.E. Sales


is also available on Amazon! 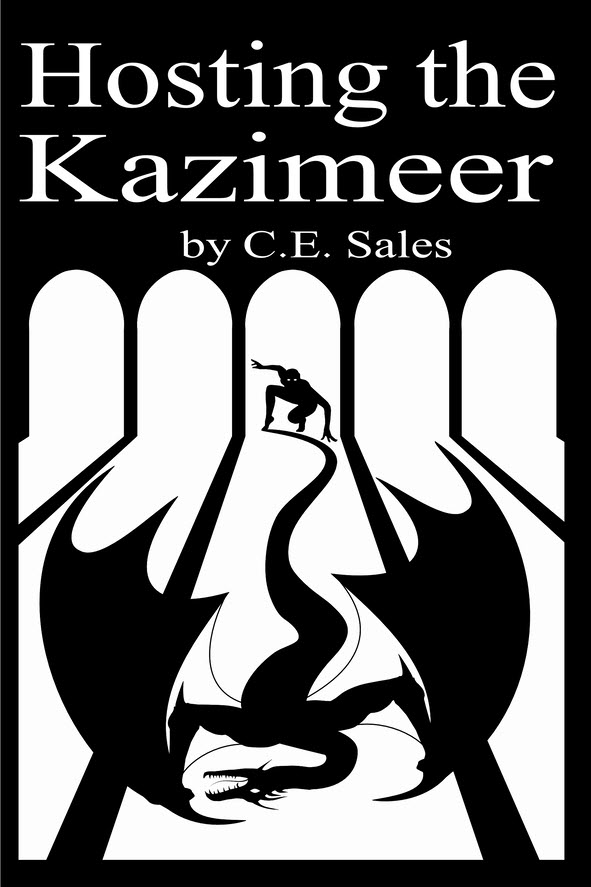 The Fate of the Land rests on the last Ivory Dragon Morpher
and he's trapped inside the mind of a boy thief !


The destruction of the Land began to take place when Landon was named Kazimeer.
Neither he nor his people are aware that this destruction was set in motion by a
force far worse than their nightmares could conjure. That force is Taj

Known only in legend as "The Dark Master", Taj was trapped a millennia ago inside
a prison called "The Pit". After a thousand years he has broken free and is still
hungry for control, holding a serious grudge against the Ivory Dragon's descendants.
Through a series of clever spells Taj frames Landon publicly for the Land's destruction
and executes him in front of the gathered population of Sevatzer.

However, Taj does not know all of the powers hidden within the Ivory Dragon.
For that matter, Landon doesn't know either. Although his body appears to be dead,
Landon's mind remains alert, active and inside the head of a young, street-wise thief
named Jaron.

Not only must Landon contend with the overwhelming problem of stopping the destruction
of the Land, he must try to do so from within a disagreeable, argumentative boy who
couldn't care less.

As if the Land's destruction, Taj's malignant takeover and the lack of a body weren't
enough, the boys must work together quickly before Landon's consciousness takes over
Jaron's body permanently!